Armed forces HQ to celebrate one year on Remembrance Sunday 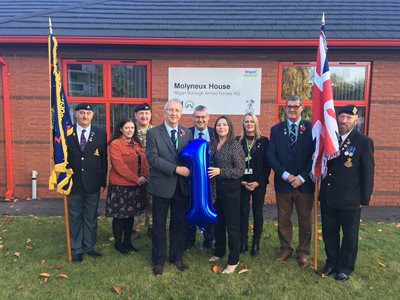 A ground-breaking HQ providing specialised support for the armed forces community will celebrate its first birthday on Remembrance Sunday.

In the last 12 months, Wigan Borough Armed Forces HQ has supported more than 200 members of the armed forces community to integrate back into civilian life.

The HQ, which was delivered by Wigan Council and the Ministry of Defence, offers support with a range of issues including housing advice and financial support. One local man who has been supported is Anthony Young, a 55-year-old ex-parachute regiment veteran.

He said: “I was going through a really bad time following a heart attack and stroke. “I had worked all my life, been active and never asked anyone for anything. Following a stroke which affected my speech and use of my left arm, for me my life was over.

“I ended up homeless, living in a wood and had basically given up all together. “I was in hospital when I was picked up by the HQ team. The support I received from the Armed Forces HQ has literally saved my life and I will be eternally grateful.

“I am now a lot better, have a lovely home that the HQ helped me furnish and they even got me a dog which has become a great companion. I wouldn’t be alive today without their support.”

It is managed by Wigan Borough Armed Forces HQ CIC in partnership with Healthier Heroes CIC and has proven to be a beneficial base for other charities including the Royal British Legion, who have offered their services from the facility.

Councillor David Molyneux, leader of Wigan Council said: “Thanks to the commitment demonstrated by staff and services operating from the hub, we have been able to support many of the borough’s armed forces families, from helping them integrate back into civilian life to offering financial and housing advice.

“In the last year, we have worked with charities, our partners and the local community to provide bespoke guidance, advice and support to the borough’s armed forces community. We have also been awarded a silver ‘Employee Recognition’ award from the Ministry of Defence to recognise our commitment to the armed forces community.”

Councillor Molyneux continued: “The borough’s armed forces HQ also doubles up as a facility for the Wigan Sea Cadets to meet up and train and is another example of how Wigan Borough is leading the way across the region. “We look forward to continuing working together with our partners to ensure a prosperous future for our veterans and the HQ.”

Based at Molyneux House (the former Withnall House building near Wigan Little Theatre) the HQ provides tailored services for veterans, serving personnel, reservists and their families and has been delivered in line with Wigan Council’s commitment to the armed forces covenant.

Copyright © 2021 Armed Forces Community HQ CIC All Rights Reserved | Website by ATTAIN
Scroll to Top
We use cookies to ensure that we give you the best experience on our website. By continuing to use this site we will assume that you consent to our privacy policy.AgreedPrivacy policy